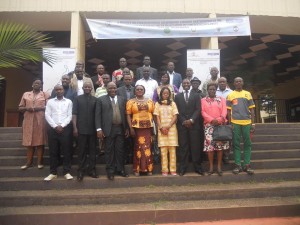 After successfully launching the project and holding the first Training of Trainers (ToT) on Decentralization, Leadership and Participatory Governance for the North West and South West Regions, in Bamenda, it was the turn of South and Center Regions held in Yaounde. The training took place from the 21st to the 23rd of September 2015, at the Centre Jean Paul 23 Mvoley in Yaounde brought together Councilors, Media Actors and CSOs Leaders. Thus, in three days, these stakeholders had their capacities enriched and empower to return to their various councils and restitute to their fellow councilors.
From Yaounde, the team returned Bamenda to carry out a similar training from the 24th to the 26th of September 2015 at the Faith Building Community Center, Bamenda for participants from the West and Littoral Regions of Cameroon.