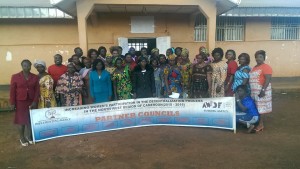 Within the month of May, female councilors, CSO Representatives, and journalists of the Municipalities of Wum, Zoah, Benakuma, Fundong, Njinikom, Ndop, Babessi , Jakiri, Kumbo,Ndu and Nkambe councils, of the North West Region, benefited from restitution seminars/workshops in their respective municipalities on “Participatory Governance and Social Accountability;” thanks to the support of the African Women’s Development Fund (AWDF). These seminars were organized and run by their counterparts, who had initially been trained as Trainers, during a three-day long training in Bamenda, organized by InterFaith Vision Foundation Cameroon (IVFCam), and funded by AWDF.
In each session, participants adopted resolutions to have more women participate in the decision-making processes within their respective constituencies. They also developed and adopted action plans to advocate for changes in policy & procedures within their various council administration vis a vis female participation.
Evidently, trainees are now taking action as those of Ndop and Babessi councils displayed during the 20th May National Day celebrations at their respectively ceremonial grounds.