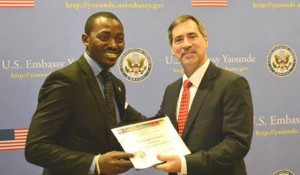 The PEPFAR Small Grants Program serves community-based initiatives intended to support Cameroon’s efforts and vision towards an AIDS free generation. The main efforts supported include awareness raising on HIV/AIDS prevention, care and treatment, linkages to HIV/AIDS services to ensure access to these services by the general population with a focus on vulnerable groups, stigma and discrimination reduction in both health facility, and community sites and health systems strengthening.

In his remarks, the Ambassador lauded the extraordinary leadership of Cameroonians from all sectors, public, private and health, whose work combat HIV/AIDS in this nation.  “They are everyday heroes whose efforts promote life amongst those affected. I am proud to present today’s awards to Cameroonian recipients of the President’s Emergency Plan for AIDS Relief (PEPFAR) small grants program.  This year, approximately $200,000 will support nine projects in six regions served by PEPFAR in Cameroon.  Together, we will build an HIV/AIDS free future.”

This year’s recipients were:

PEPFAR is the U.S. Government’s initiative to turn the tide of the HIV/AIDS epidemic around the world. This historic commitment is the largest by any nation to combat a single disease internationally. PEPFAR investments also help alleviate suffering from other diseases.

In Cameroon, PEPFAR began in 2010, and has invested over $60 million to date. PEPFAR is administered by the U.S. Centers for Disease Control (CDC), the U.S. Agency for International Development (USAID), the Department of Defense (DoD) , the Department of State, and the Peace Corps. Approximately15 Cameroonian and international implementing partners including the Ministry of Health join our efforts.

All PEPFAR investments, and these grants, are aligned with Cameroon’s National HIV/AIDS Strategic Plan and work to strengthen the capacity of Cameroon’s government, non-governmental and private sectors, and civil society to respond to the HIV/AIDS epidemic.

Proposed PEPFAR initiatives are considered eligible if these can sustainably contribute towards HIV/AIDS prevention, care and treatment.  The small grants awarded by Ambassador Hoza support core program areas to serve more than 50,000 women, children, and men within the next twelve months.