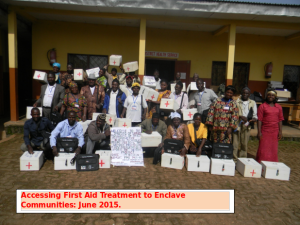 Of IVFCam’s three development programs, the Health & HIV/AIDS program, practically, has the greatest outreach at the grassroots where diseases are rampant due to ignorance, poverty, poor sanitation and cultural practices.

This program focuses on promoting good health & sanitation, and the fight against HIV/AIDS among target beneficiaries and their households. Actions aimed at mitigating the impact of a pandemic or disease on the lives of beneficiaries as well as their communities are integrated in IVFCam’s three development programs and Charities.

I. GOAL OF PROGRAM:

By this program, IVFCam aims at contributing contributing to building healthy communities and nations beyond the Millennium Development goal of “Health for All by 2015.”

Thus, IVFCam helps communities to identify and address their health challenges through prevention, service delivery and support, with respect to national and international expectations.

IV. CORE VALUES OF THE PROGRAM

Because of Cameroon’s geography, topography and foods, etc, her citizens are vulnerable to common tropical diseases and other world known preventable generic diseases. Since IVFCam’s target population is predominantly poor, IVFCam promotes the perspective and practice of preventing diseases rather than getting infected and seeking for cure/treatment, which is not usually affordable.

Specific to HIV/AIDS, while developed communities in Cameroon have accepted the prevalence of HIV/AIDS as a disease, and that it can be prevented or treated, enclave communities within the grassroots continue to regard HIV as a phenomenon or “Witchcraft;” and so, preventing HIV transmission still remains a challenge in such communities. This is largely why the disease is still highly prevalent at 8.7% above the national prevalence rate of 4.5% within regions like the North West that have culturally-adhered communities (NACC 2010). Such communities continue to practice unprotected sex, multi-partner-sex/marriages, widow-inheritance, common use of sharp objects, traditional scarifications and denial of condom use (AI-ChrisWOV-Mission 21-Switzerland 2006; and IVFCam-PACF-UK 2012-2015+).

IVFCam extensively focuses on preventing HIV new infections, especially from mother to child. Her ongoing projects on PMTCT reach out to hundreds of pregnant women & their male-partners, and new borne babies.

1.4 Target Population we Partner with to Effect Desired Changes:

NB: The Ministries of Health is the inherent government partners.

1.5 Beneficiaries: Those for whose sake this intervention is carried out.

1.6 SOME PROJECTS REALISED ON PREVENTION OF COMMON DISEASES.

Health worker demonstrate to widows on the use of female condoms

Funded by the Positive Action for Children’s Fund, UK, this intervention aimed at securing the reproductive health rights of young widows and keep them alive and healthy to bring up their orphan children.

It was in response to the baseline survey findings and recommendations of 20005 and 2006 (“Problems & Needs of Widows”).

The leaders of the mobilized & constituted widows groups were then trained on and provided First Aid boxes that contain materials like condoms, blades, cotton, gauge, spirit etc and generic drugs. All these tools will help prevent widows and their immediate family members from getting in direct contact with infected blood.

Still funded by PACF-UK, this second phase of the project included men, as Community Workers on HIV Prevention, and promoting the Prevention of Mother To Child Infection of the HIV virus.

This project came up as a result of the challenges experience during the implementation of the project on “Tools for HIV Prevention.” IVFCam realized that one main channel of HIV infections and re-infections was through Mother-to-Child-Transmission (MTCT). This was common especially among widows and single mothers, who, unfortunately, do not have any control over their male partners.

After the PACF-UK’s field M&E visit to IVFCam’s project sites in the North West Region, this project was accepted as a practical continuation of the first two phases: increasing the uptake of Ante Natal Clinic Services to eliminate new infections among new borne babies. Therefore, PACF-UK funded this third phase for 2015-2016. 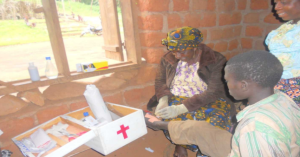 A trained Widow, as Community Health Service Provider now provides Care to an Orphan in her village

Whatever intervention is made on the field can only be effective if the Chiefs of Centre and other Health Personnel have updated information and practices on services required.

Where there is no Health Centre at all, these Community Health Workers, with their First Aid Boxes, will begin the process of medical care in situations of emergency, and then carry the patient to the hospital or health unit for intensive follow-up.

3.0 CARE & SUPPORT TO THE INFECTED/AFFECTED:

Women suffer the most due to cultural barriers that subject them to humiliation, acute poverty and exclusion. Most infected women, especially widows, shy away from public meetings of their kind and rarely attend meetings at treatment centres mainly because of stigmatization and financial constraints. Consequently, their situation deteriorates because they lack the right information and practices to help stabilize their treatment or manage their health… (IVFCam-PACF-UK 2012-2015+).

Orphans infected and affected suffer from lack of care, through school drop-out, to lack of food and other basic livelihood needs.

To help infected persons properly manage their health situation or effectively adhere to treatment, while relieving the burden of child-care on care-givers.

Target Population we Partner with to Effect Desired Changes:

NB: The Ministries of Health is the inherent government partner here.

3.2 Beneficiaries: Those for whose sake this intervention is carried out.