This is the biggest source of income for the charity.  The sponsors are the founders of IVFCam, Mr. Wilfred Dawila Fomumbod (of blessed memory), Anne Stella Fomumbod, and their children.
Created with the founding of the Mission in 1999, this fund has grown and is now supporting the following different projects:

Beneficiary Orphans TrainingWilfred Dawila Memorial Project for Orphans in Business During Holidays: (SMALL MONEY–BIG CHANGE)
Following the death of one of the two founders, Wilfred Dawila, in 2009, this fund was founded in his memory.
Wilfred had pity for children who moved around selling articles during holidays to raise money of their own for their school fees and books when schools reopened. One day, he interviewed one of the children, on how much she realizes in a day on the sale of boiled fresh groundnuts. This child explained that when she takes a bucket of groundnuts on borrowed basis to sell, she will realize a profit of CFAF1,000frs. and loose CFAF500frs. because the purchase price will be higher.  But if she pays cash when buying, the purchase price will be lower and she will then realize a higher profit at CFAF1,500Frs. This child added that she sells one bucket of groundnuts every day, except on Sundays.
Being a mathematician by profession, Wilfred Dawila Fomumbod carefully made a calculation on the child’s total profit a month when she takes the groundnuts on borrowed basis to sell compared to the profit when she realizes when she purchases in cash to sell.
The results proved that this child looses a total of CFAF500 x 25days of marketing, which is equal to CFAF12,500frs. when she borrows groundnuts to sell. This implies that this same child would have had this same amount as an additional profit, had she the cash capital to buy the groundnuts and sell.
Wilfred’s dream was therefore to support orphans in holiday business ventures, by giving them the financial capital to buy their articles up front and sell for higher profit margins. Unfortunately for him, he passed away in same year. His family then decided to put in place this scheme in his honour.
Since 2009, at least 120 adolescent orphans between the ages of 13years and 18 years in the senior primary and secondary schools have benefited from this project by receiving at least CFAF5,000frs. each to purchase  and sell articles during holidays. Miraculously, within just one-and-a –half months of sale, each holiday, each child realizes an average of CFAF20,000Frs.
Of course, this is huge amounts that go a long way to help the foster-families acquire the orphans’ school needs for an equipped “Back-to-School.”

WilStar PROJECT NO. II:
Wilfred Dawila Memorial Project for Birth Certificates to Orphans:
Another area of concern for the late Wilfred D. Fomumbod was the lack of birth certificates by Orphans and Other Vulnerable Children. He held that “A child without a Birth Certificate has no citizenship.”
Therefore, this scheme is specific to the production of birth certificates for children of the final class of the primary school. The birth certificate is a pre-requisite to registering the First School Leaving Certificate examination; and other engagements in life after the primary school.
Ironically, in rural localities, especially, foster-families of orphans are usually so poor that they are unable to acquire this document. Collaborating with head teachers of target schools, the Wilfred and Stella (WilStar) Fund provides the money needed to acquire the necessities to have the certificates produced by the local councils before the examination registration.
Started in 2010, this scheme has sponsored the production of at least two hundred (200) birth certificates on an average of fifty (50) each academic year. 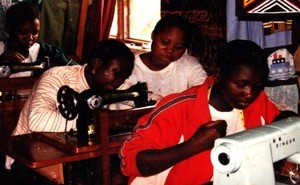 In appreciation of the professional accomplishments of their own children, Wilfred and Stella decided to put up this scheme in 2012, to support orphans in their career pursuit, including:

Usually, foster-parent provides shelter, food and clothing while IVFCam, under the WilStar fund, pays the training fees and provides the training materials.