IVFCam Organizes and Hold the Second Interregional Conference to Strengthen Capacities of Top Female Leaders from the Center, South and East Regions. 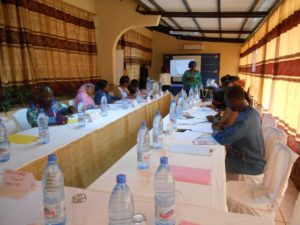 Coming on the heels of the  Garoua conference, the 16th and 17th of February 2017, remains a remarkable day in the lives of Top Female Leaders (Ministers, Senators, Parliamentarians, Mayors, Civil Society Organizations Leaders) from the East, Center and South Regions.  Converging at the Mansa Hotel in Betoua, Top Female Leaders improved their knowledge on Civic Participation, Leadership and Good Governance; and brainstorm on possible solutions to problems plaguing the women of their respective regions. The East region playing host to the Central African Refugees became the appropriate venue for the conference, as this is one of the major problem the women are grappling with on a daily basis. The female leaders from the Center, South and East during the conference identified a series of problems posing as a threat to female participation in their regions, prominent among which were the high rate of illiteracy, poverty and lack of interest in politics. With these problems, recommendations were developed to be harmonized and presented at the National Conference in Yaounde for onward transmission to the Gender Network in Parliament for possible policy revision.