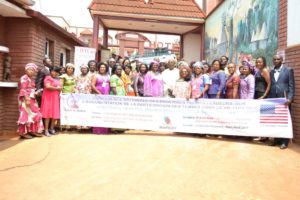 The conference initially slated to hold in Bamenda being the political hot pot of the country was unavoidably moved to Bafoussam due to yet a political crisis that is rocking two English speaking Regions without any guarantee for security. Notwithstanding, though rescheduled in Bafoussam, Female Ministers, Senators, Parliamentarians, Mayors and Civil Society Leaders from these parts of Cameroon honored the appointment to improve their knowledge on increasing women’s participation in public life, and reflected on the problems homogeneous to their region that hinder women’s participation. Subsequently, resolutions were adopted, harmonized with those of other region, presented at the national conference and transmitted to the gender network in parliament for a possible revision in policy. This last interregional conference now set the ground for to the enlarge National Conference in Yaoundé that held on June 06, 2017.