IVFCam leads the campaign for increased female participation in elections 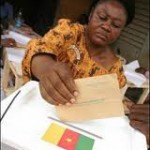 IVFCam at the forefront of increased female participation in the 2013 Legislative and Municipal Elections in Santa, a locality in the North West Region of Cameroon.

According to an IVFCam Public Survey,

there has been a significant increase in the number of female councilors in the Santa Council this time around. Out of the 32 women who went in for the elections, 13 emerged victorious; 9 from the CPDM party and 4 from the SDF party. This was not the same situation during the last legislative year at the council where only seven women represented the female population of Santa. The Santa woman will also be represented at Cameroons National Assembly by Ngwafor Grace who was voted parliamentarian for the Santa Constituency. This is due to the massive participation of the female population of Santa in the just ended elections. Statistics from the Monitoring and Evaluation Report conducted by IVFcam recently indicate that close to 40

percent of the female population in Santa took part in the elections. But why the increase in female participation this time around.

It all started with the initiation and implementation of the project entitled ‘’Implementing Conventional Laws and practices at the Grassroots for increased female participation in upcoming elections’’ The project that was written and proposed by Interfaith Vision Foundation Cameroon [IVFcam] was sponsored by the Global Fund for women in the The first thing to remember is that each free slot machines has its own list of payoffs and rules. United States of America. IVFCam started

the campaign with massive Community education and awareness on the existence of conventional laws for women’s protection/participation and trainings on the interpretation and adaptation of the laws. This contributed positively in mobilizing the women in Santa to come out in their numbers and defend the rights of the female folk in the elections.

The success story in Santa is part of IVFCam’s effort in promoting Good Governance from the grassroots to the Nation. Similar results were obtained in Councils in Limbe in the South West Region,Douala in the Littoral and some eight Councils in the North West Region.