IVFCam launches the UNDEF Project: “Strengthening Grassroots Citizen Participation in the Implementation of Decentralization in Cameroon” and train Counselors, Journalist and CSO representatives as Trainers of Trainers

IVFCam launches the UNDEF Project: “Strengthening Grassroots Citizen Participation in the Implementation of Decentralization in Cameroon” and train Counselors, Journalist and CSO representatives as Trainers of Trainers
The project launching which took place on the 2nd of September 2015 at Azam Hotel Bamenda under the chairman ship of the representative of the Governor of the North West Region the launch brought together administrative authorities in the region, participants from six (06) relay CSOs of the six regions where the project is been implemented, 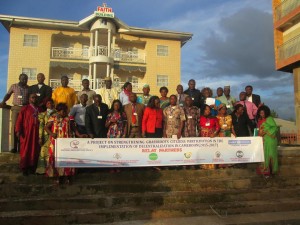 councilors, media actors, representatives of other Civil society Organization, members and staff of IVFCam, friend and well wishers. This project aims at increasing grassroots participation in holding stakeholders accountable. As such, the project target councilors, media actors, and Civil Society Representatives. The project will run for two years and target six (06) regions of the country which are: Center, South, West, Littoral, South West and North West Regions.
Prior to the launching ceremony, was the opening of a three (03) day workshop on Decentralization and Participatory Governance. The workshop then continues the following day at Faith Building Ntarinkon. Modules handle during the training included: Decentralization, Social Accountability, Leadership Community Mobilization and Project Management.
It is expected that participants to this workshop to return to their various areas of intervention to train their fellow colleagues on the knowledge gained. The workshop for the the other regions-Center & South, West & Littoral, will be held subsequently in Yaounde and Bamenda respectively.