IVFCAM LAUNCHES THE PROJECT “INCREASING WOMEN’S PARTICIPATION IN THE DECENTRALIZATION PROCESS IN THE NORTH WEST REGION OF CAMEROON” FUNDED BY AWDF GHANA AND HOLD THE FIRST TRAINING OF TRAINERS WORKSHOP. 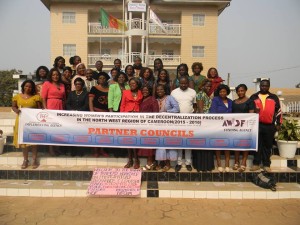 The project: “INCREASING WOMEN’S PARTICIPATION IN THE DECENTRALIZATION PROCESS IN THE NORTH WEST REGION OF CAMEROON” was officially launched on the 16th of February 2016 at the IVFCam Community Centre (Faith Building), Ntarinkon . The opening ceremony gave way to the first ever ToT seminar-workshop to train a cohort of female Counselors, female Journalist and female CSO representatives as Trainers from the 16th to the 20th of February 2016.
The project that is funded by the African Women’s Development Fund (AWDF), aims to strengthen the knowledge and capacity of female elected leaders a, women headed CSO’s and local media houses on decentralization, community mobilization, participatory governance and accountability.
As such, thirty female (30) participants from 10 Council areas in the North West Region; with each council area represented by 02 councilors + 01 Journalist + 01 Civil Society representative were trained. The target councils are: Nkambe, Ndu, Kumbo, Babessi, Ndop, Fundong, Njinikom, Wum, and Zhoa Councils.
With this training, participants to this workshop are expected to return to their various council areas to train their fellow colleagues on the knowledge gained via restitution sessions envisage for March 2016.