Interfaith Vision Foundation’s Chief Executive officer, Anne Stella Fomumbod has been selected to take part in the upcoming BBC 100 Women Conference to take place at the BBC broadcasting House in London on Friday October 25, 2013. The C.E.O of the Bamenda based Non Governmental Organization was nominated by the African audience who took interest in her advocacy for women”s human rights and participation in decision making bodies. Anne Stella will be sharing her success stories with other women around the world who have achieved extraordinary things in the last century. 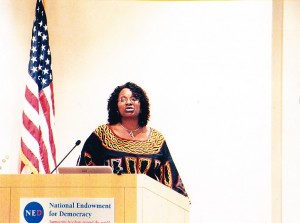 Women Conference is aimed at supporting women who despite major steps forward in securing political, cultural and social rights still face steep challenges compared to their male counterparts. IVFCAM”s C.E.O, Anne Stella Fomumbod has been very active in this domain. She successfully lobbied for the passage of laws protecting the rights of women particularly widows in local communities such as the Metta charter on widowhood (January 2010) and she is currently working on the Nkambe and Misaje charters. During October 2013 the BBC”s 100 Women season will seek to shine a light on life for women in the 21st Century – the risks, challenges and opportunities they face every day, in every country. The BBC’s 100 Women encounter will also focus on genuine dangers facing women such as the threat of female genital mutilation, domestic violence or sexual abuse. Anne Stella who is an expert in this domain says she is traveling to London with a bag full of contributions to erase the marginalization of the woman. The conference will be streamed online and broadcast live in English on BBC World News TV and World Service radio, as well as by many of BB’s 27 global language services.

The 100 Women season is a chance for women to be represented, involved and inspired.