InterFaith Vision Foundation Cameroon (IVFCam) strengthens the capacities of top female leaders of the Grand North.
Within the frame work of the National project: “Building a Caucus of Cameroonian Women’s Civic Rights Advocates” (CamWoCRA), funded by the Secretary’s Full Participation Fund via the United States Embassy in Yaounde, aimed at strengthening the capacities and to build a caucus of Female leaders in Cameroon. The project implemented in the 10 regions of Cameroon, organized three inter-regional Conferences in three strategic towns in three regions of the country: Garoua for the three Northern Regions due to the Boko Haram terrorist activities; Betoua for the East, Center and South Regions as the host to many refugees from central African Republic; and Bamenda for the North West, South West, West and Littoral Regions, as the Political Hot pot of Cameroon).Garoua, the host city of this first inter-regional conference for Top Female Leaders (Ministers, Senators, Parliamentarians, Mayors, Civil Society Leaders) of the three Northern Regions of Cameroon became home to these leaders for two days, where the Female Leaders had their capacities strengthened on Civic Participation, Leadership and Good Governance, and brainstorm on possible ways of creating a caucus of Top Female Leaders from the 19th to the 20th of January 2017 at the Benoue Hotel in Garoua. This first of a series of a series of similar conferences organized nationally, brought out the common problem women faced peculiar to the grand North, and proposed resolutions on how to better addressed them. This conference was also a forum to inform top leaders on the role NGOs play, combining strengths of political institutions and CSOs in addressing women’s issues.
At the end of this conference, the problems that hinder women participation peculiar to the three Northern Regions were identified, and recommendations adopted for harmonization to be transmitted to the Gender Network in Parliament for possible deliberations and policy revision. 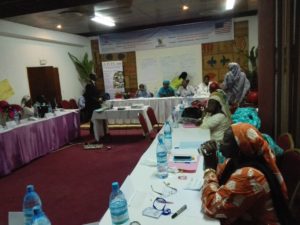