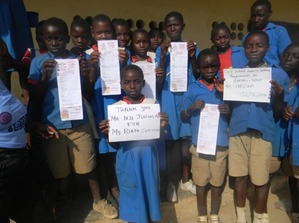 This sector of IVFCam’s work is the backbone of her mission.  Based on a DIVINE vision in 1999, the Visionary, Anne Stella, was called by the LORD, to serve orphans and widows, as her own way of “Translating her Faith into Action.”   She had to involve other charitable hearts to join her translate the vision into a mission, which today goes by the name “InterFaith Vision Foundation Cameroon, (VFCam).”

B) GOAL OF CHARITY:
IVFCam aims at translating The WORD from the Holy Bible to “Feasible and Realistic Actions of Charity and Development:

Socially, it is popularly held that “It is better to teach someone to fish and not give him fish.” But IVFCam’s charities, it is better to safe a dying man’s life, by first giving him fish and build up his strength, after which he can then be taught how to fish. Failure to respect the later before the former may lead to the death of the man we all want to teach how to fish.
Programs:
The Charity sector provides Relief support i.e “GIVE FISH TO SAVE THE HUNGRY FROM DYING.” It runs three basic programs:

Each program has a series of projects whose nomenclature/classification and naming are based on the source that supports the implementation of the project.
PRESENT SOURCES OF SUPPORT:
This sector involves different individual and group support, called “Charity Funds.” So far, the following funds have been the main sources:

For this reason, and in order to appreciate the enormous efforts and sacrifices made by the donors, each charity project is named after its funder.

1.0 Wilfred & Stella (WilStar) Charity Fund for Orphans:
This is the biggest source of income for the charity.  The sponsors are the founders of IVFCam, Mr. Wilfred Dawila Fomumbod (of blessed memory), Anne Stella Fomumbod, and their children.
Created with the founding of the Mission in 1999, this fund has grown and is now supporting the following different projects:

Beneficiary Orphans TrainingWilfred Dawila Memorial Project for Orphans in Business During Holidays: (SMALL MONEY–BIG CHANGE)
Following the death of one of the two founders, Wilfred Dawila, in 2009, this fund was founded in his memory.
Wilfred had pity for children who moved around selling articles during holidays to raise money of their own for their school fees and books when schools reopened. One day, he interviewed one of the children, on how much she realizes in a day on the sale of boiled fresh groundnuts. This child explained that when she takes a bucket of groundnuts on borrowed basis to sell, she will realize a profit of CFAF1,000frs. and loose CFAF500frs. because the purchase price will be higher.  But if she pays cash when buying, the purchase price will be lower and she will then realize a higher profit at CFAF1,500Frs. This child added that she sells one bucket of groundnuts every day, except on Sundays.
Being a mathematician by profession, Wilfred Dawila Fomumbod carefully made a calculation on the child’s total profit a month when she takes the groundnuts on borrowed basis to sell compared to the profit when she realizes when she purchases in cash to sell.
The results proved that this child looses a total of CFAF500 x 25days of marketing, which is equal to CFAF12,500frs. when she borrows groundnuts to sell. This implies that this same child would have had this same amount as an additional profit, had she the cash capital to buy the groundnuts and sell.
Wilfred’s dream was therefore to support orphans in holiday business ventures, by giving them the financial capital to buy their articles up front and sell for higher profit margins. Unfortunately for him, he passed away in same year. His family then decided to put in place this scheme in his honour.
Since 2009, at least 120 adolescent orphans between the ages of 13years and 18 years in the senior primary and secondary schools have benefited from this project by receiving at least CFAF5,000frs. each to purchase  and sell articles during holidays. Miraculously, within just one-and-a –half months of sale, each holiday, each child realizes an average of CFAF20,000Frs.
Of course, this is huge amounts that go a long way to help the foster-families acquire the orphans’ school needs for an equipped “Back-to-School.”

WilStar PROJECT NO. II:
Wilfred Dawila Memorial Project for Birth Certificates to Orphans:
Another area of concern for the late Wilfred D. Fomumbod was the lack of birth certificates by Orphans and Other Vulnerable Children. He held that “A child without a Birth Certificate has no citizenship.”
Therefore, this scheme is specific to the production of birth certificates for children of the final class of the primary school. The birth certificate is a pre-requisite to registering the First School Leaving Certificate examination; and other engagements in life after the primary school.
Ironically, in rural localities, especially, foster-families of orphans are usually so poor that they are unable to acquire this document. Collaborating with head teachers of target schools, the Wilfred and Stella (WilStar) Fund provides the money needed to acquire the necessities to have the certificates produced by the local councils before the examination registration.
Started in 2010, this scheme has sponsored the production of at least two hundred (200) birth certificates on an average of fifty (50) each academic year.

In appreciation of the professional accomplishments of their own children, Wilfred and Stella decided to put up this scheme in 2012, to support orphans in their career pursuit, including:

Usually, foster-parent provides shelter, food and clothing while IVFCam, under the WilStar fund, pays the training fees and provides the training materials.

2.0 WILFRED & STELLA  (WilStar) Charity Fund for Widows:
This scheme includes:
Grants to individuals and groups for Income Generating Activities.
Gifts of farm tools and farm inputs.
Gifts of food and clothing to poor widows and their orphan-children.
Experience-sharing & Retreats for widows’ Social-development.

WilStar’s  Gifts of food and clothing to poor widows and their orphan-children.
This usually takes place in December each year, in order to enable these targets enjoy the Christmas festivities, like other citizens of their communities.

3.0 FOCAL MEMBERS’ CHARITY FUND.
This started way back with the mission in 1999 and has remained the main and surest source of support for orphans.
Focal members are the founders and others who duely register and pay annual subscriptions.  As at now, each member pays a token of CFAF30,000 each year.
Their money goes, especially to sponsor orphans in primary and secondary schools by:
Paying their fees.
Buying their books, bags, and writing materials.
Giving them some basic food items and hygienic needs.
Each year, at least twenty children are supported.

4.0 IVFCam’s STAFF CHARITY FUND.
This was created in 2014 by the staff body of IVFCam. Their purpose was to contribute to the realization of the Organization’s mission, by supporting more orphans in their basic school needs.
Every month, each staff pays a percentage of his/her salary, as “tithe,” to the fund.
2015 is the staff’s first outreach with their charity.

5.0  SYLVIA A. EATON CHARITY FUND.
Sylvia Anderson Eaton lives at Silver Spring, Merry Land, USA, and was an audience at the National Endowment for Democracy, Washington DC, in 2011, during the presentation of IVFCam’s works, by the CEO of IVFCam. She followed with keen interest. Immediately after this public presentation, Sylvia invited the CEO to make similar presentations to audience whom she mobilized at her residence.  Convinced and pleased by the works of IVFCam, Sylvia opted to make her own contribution,  to promote the vision and mission of IVFCam; particularly for Orphans and Widows.
Sylvia’s financial contributions of 2011 and 2012 are today making great strides in the lives of beneficiary widows. In fact, the present Revolving Scheme for Widows groups of Mbengwi Subdivision, North West Region, was put in place by Sylvia Anderson.
Sylvia Eaton’s  Grants to groups for Income Generating Activities (IGAs), and agriculture.

6.0   THE PUBLIC CHARITY FUND.
This is an open fund for any individual and group sympathizers, who may donate through bank transfers, upfront cash or by dropping money into a special box kept in the office.
It is also for national and international donors that support on large scale.
Donors prescribe the type of project that is to be implemented by their support.
Projects realised under this fund includes:
Provision of basic school needs to orphans.
Health insurance schemes.
Provision of Nutritional and Hygienic needs; like the picture shows below: